Can you guess the percentage of the population that flosses every day? It’s less than one third—in fact, it’s only 30%.

Now can you guess the number of people who tell their dentist that they floss? While we don’t have a hard number to give you, your local Fort Worth dentist can tell you that at last 80% of clients tell us that at their regular appointments. And yes, Dr. Ku can tell when you don’t floss regularly (but claim you do)!

Don’t feel like you need to cover up—just work flossing into your daily routine! We understand that flossing isn’t your idea of a good time. While we don’t necessarily disagree, we do want to offer suggestions and tips on how to reinvigorate your flossing routine. It doesn’t have to be boring!

The original floss actually dates back to prehistoric people. Archeologists have found grooves in the teeth of prehistoric humans and hypothesize that horse hairs were used to get the tough meat and fibrous plants out of hard-to-reach places in the mouths of our early ancestors.

Through the nineteenth century to the present, floss has evolved and changed as a result of many key world events. For instance, during World War II, the traditional silk floss had to be replaced by nylon due to rising costs for materials with the war effort.

Today, modern technologies and synthetic materials have once again influenced the development of floss. Think to the floss that you have in your bathroom drawer. It’s probably in a white, nondescript container, and possibly collecting dust. However, one company today is out to change the face of flossing forever. Cocofloss claims to be a superior floss made with more than 500 interwoven filaments, giving it a maximal surface area to snatch plaque and debris from between your teeth and gums. Step aside boring, packaging and mundane mint flavors! Cocofloss comes in flavors such as orange or coconut and looks more like something you would see in an upscale boutique than on a grocery store shelf.

Not much has changed in the mechanics of flossing since our prehistoric ancestors. That is, until we could start to floss by air. AirFloss is a new device developed by Philips Sonicare to remove plaque biofilm from between the teeth. It uses a rapid burst of air plus water droplets to disrupt the biofilm between the teeth. This is called microburst technology. Studies have shown AirFloss to remove up to 99% more plaque than manual brushing alone. Thus, the addition of this flossing solution to a brushing-only technique would be something Dr. Ku and his team can get behind!

Finally, today’s electronic flossers are another interesting option. Electric flossers can be a suitable option for people with dental work or who have difficulty flossing by hand. Electric flossers work by directing a stream of air and water (or just water) into the spaces between the teeth. The pressure of the stream helps loosen and rinse away little pieces of food, debris and plaque.

Even though only 30% of people floss, in North America alone over three million miles of floss are purchased each year. That amount of floss would wrap around the world over 120 times! Just remember to use that floss on your teeth! 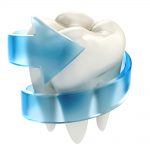 Do You Need Tooth Contouring?Dentistry 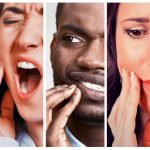 What Causes a Temporary Toothache?Dentistry